a
1
2
3
4
5
6
6
7
8
9
A
B
IMPORTANTTo read the national and local advice about coronavirus
CLICK HERE
CLOSE
Contact
Open Hours
Book An Appointment
Vaccines
Destinations
Branches
Wainwrights Chemist
02380 612 845
General
Need some help?
Email Us
Fax
02380612845
Ambulance
999
NHS
111
Online Shopping
0300 303 3380
Covid NHS Hotline
119
Social
Facebook
Twitter
* Please be advised that we record all incoming and outgoing calls. This is for training and quality purposes and to protect both our staff and patients
Usual
Opening Hours
Monday
09:00 to 13:00
14:00 to 18:00
Tuesday
09:00 to 13:00
14:00 to 18:00
Wednesday
09:00 to 13:00
14:00 to 18:00
Thursday
09:00 to 13:00
14:00 to 18:00
Friday
09:00 to 13:00
14:00 to 18:00
Saturday
09:00 to 12:30
Sunday
Closed
Bank Holiday
Opening Hours
Our opening hours may vary from branch to branch. Visit our branches page to see the opening hours of your nearest branch.
See Branches
Cholera
Diphtheria
Hepatitis A
Hepatitus B
Japanese Encephalitis
Meningitis A,C,W, and Y
Polio
Rabies
Tetanus
Tick-borne Encephalitis
Typhoid
Yellow Fever
Africa
Antarctica
Asia
Australia & Pacific
Caribbean
Central America
Europe
Middle East
North America
South America
Blog, News & Views
Accurate at time of Posting
Search...
BLOG
What we have to say about your health and well being
15
Oct 2021
Serendipity!
Serendipity!
There's an old adage which says without our heritage we are nothing. And just in case we forget, something comes along as a poignant reminder about how we must live up to the standards set by those in the past because they gave us what we have today.
Surprised and astonished would be very good descriptions of how we felt when we were presetented with this little reasurance from Janie Penn - Barwell which can still make the hairs stand on the back of your neck.
Janie was visiting a friend in Ashburton, South Devon when a kind stranger came to her rescue with some change for parking. She was so touched she wanted to give her thanks on the Ashburton Neighbours facebook and the following day she checked to see if the anonymous  donor had replied. Sadly they did not but she was struck by a random photograph of a hand holding a little chemist label on it from the early 1950s!
Janie contacted its owner, Sarah to tell her she still uses the sister pharmacy in Bishopstoke (the eastleigh branch closed in 2006) and offered to buy it for us. Sarah refused payment or postage and kindly sent it to Janie who surpised us all with it at the pharmacy.
And thats the story of how this rare little beauty finally found its way home!
Its unkown how this bottle which once contained oil of peppermint, historically only affordable to the rich and gentry for indigestion (delicately dabbed behind each ear using the corner of a well - prssed serviette), somehow ended up in Ashburton! However part of this medical mystery could be solved by finding its purchaser in our archive of extemporaneously dispensed medicines journals dating back from when the pharmacy first opened.
It's such a boon after all the long hours, back breaking hard work, struggles, trials and tribulations over the last two years to have found this. It makes it all worthwhile not only because it's a real privilege to be part of Bishopstoke village life but also the guardian of Wainwright's chemist for the next generation. This pharmacy has a unique history and has been a constant fabric at the heart of this great community.
We are always mindful at Wainwright's that if we totally scrape the old ways off and forget about them then we lose traditional values and leave behind everything we ever stood for. So the trick in managing change is is to always respect the past and take the best into the future. And that's our motto because is no incentive so great or medicine so powerful as hope for a better tomorrow.
Thank you so much Janie, Sarah of Ashburton and the anonymous donor in the car park. Clearly like Bishopstoke, Devon also has some very kind people. Christmas has come early and we can never thank any of you enough xxx
Here's to the next 70 plus years of Wainwrights chemist still being part of Bishopstoke life and surving in peak condition as this little beauty has done! 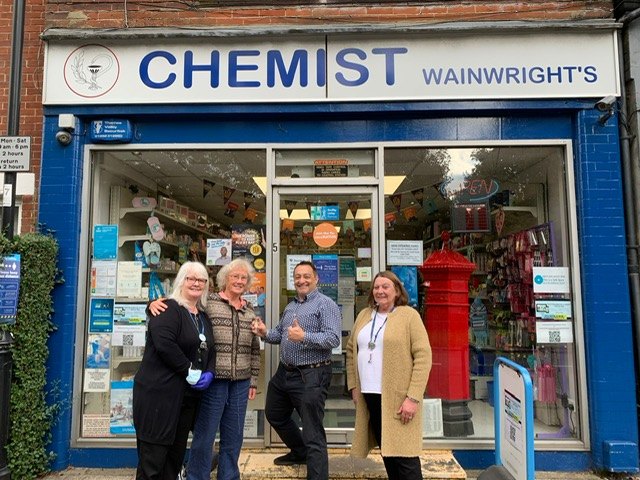 You told us, we listened... Now we are very pleased to announce our new fully insured and accredited Micro-Suction Ear Wax Removal Service by a fully trained and qualified ear health specialist using an otoscope; available for home visits and at this pharmacy.
This is a booking-only service through our website or app but please call to arrange home visits or Friday and Saturday bookings. There's already been a high demand since it started a few weeks ago and we are very pleased to see such positive outcomes, and very positive feedback so early on.

Please use Earol Wax Spray (normal Olive Oil has the wrong pH for your ear health) for FIVE days before your appointment date is due otherwise a return visit may be required and click on the 'More' Button on the Booking Page before you book for important information.
Thank you

Don't show this again
MENU
Main Menu
No Results
Shopping Categories
More Categories
In Store Shopping
More Products
Online Shopping
More Online Products
Health
Search Health Articles...
Search Medicines...
Coronavirus Advice
Admin Tools
Settings
Volume
Text
Device
Your Basket
In Store
Total
Checkout
Online
Total Excl VAT
VAT
Total
Checkout
Live Chat
Live chat is currently disabled. Toggle the switch to make yourself available for live chat.
Active
Pending
Type your message and press enter to send, An administrator will reply to you shortly
Chat...
Send
End Conversation
Back to Chats
Please select a branch to view orders, patients and history...
Website
Select Branch
Order In
Patient Orders
Pending Orders
Complete Orders
Order History
Patients
Register Reminders
Statistics
Configure
Log Out
Speciify which content you wish to enable on your site
Flu Pages & Content
Medic Spot Covid Test Pages & Content
Medic Spot Travel Planner
Online Doctor Pages & Content
Testimonials Pages & Content
Travel Clinic Pages & Content
Back
Next
What do you want to do?
Visit the website home page
Visit the website page for my pharmacy
Change my pharmacy
Back
Next
1
2
3
4
5
6
7
8
9
10
11
12
13
14
15
16
17
18
19
20
21
22
23
24
25
26
27
28
29
30
31
Back
Next
Please provide your email address you use to login to your account, we will then send you a password reset code.
Email
Back
Next
Back
Next
The following list shows all the items you have placed orders for, click on an item to see all the dates you have placed an order for the item.
Back
Next
Please provide a little more information to finish setting up your account...
Which of our stores you use
Are you registered for GP online services?
The surgery you are registered with
Are you exempt from prescription charges?
A contact telephone number
Your home address
Messages
No new messages
Your surgery does not currently allow you to place orders via GP online services. Please contact your surgery to resolve this or click here to unlink.
Online prescription ordering is not currently enabled for your branch. You can still store your items and set reminders to re-order.
You haven't set up any reminders to reorder your prescription items. Click here to setup reminders now
Your recent prescription orders
What do you want to do?
Change User
Order
Manage
Pharmacy
History
Purchases
Log Out
Please enter your login details to access your account...
Email
Password
Keep me logged in
Help! I have forgotten my password
Back
Next
To keep your password secure you will periodically need to change it. Please provide a new password to login to your account.
Email
New Password
Back
Next
If you have an NHS account you can use it to login to your account. By doing so we can automatically collect information required to connect to your GP online.